Apparently the book and photos I sent to Olga a couple of weeks ago only arrived yesterday. I was sad that they arrived too late for Olga to see them. But Lynda was touchingly appreciative. She also sent me the obituary they’ve written that will run in all the local newspapers this weekend and she encouraged me to share it. It’s lovely (of course). Here it is: 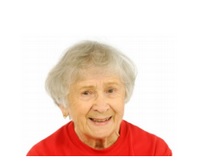 On a wall in the cozy home of a Super Senior hang a few of her 750 gold medals for track and field. The medals are for running and throwing events and each one celebrates Olga Kotelko for her mastery in the sport. Under the daily newspapers on her desk lies a sheet of paper listing the 37 world records she earned in 100m, 200m, high jump, long jump, javelin, discus, hammer, and shot put between 1996 and 2014 — the year she turned 95.

Olga died on Tuesday, June 24 after suffering a cranial hemorrhage.

She believed that maintaining a positive attitude was key to her many years of good health and high energy. She was a fearless competitor who tackled each new adventure with passion and determination: ‘Wishing for something won’t make it happen; you have to work for it.’

In 1919, in Smuts, Saskatchewan, Olga was born the 7th of 11 children to loving Ukranian immigrants Wasyl and Anna Shawaga. On the family farm she learned to milk cows, tend a vegetable garden, and cook her favourite foods: borscht, pyrogies, and cabbage rolls. She continued her gardening and cooking throughout her long life.

In 1941 she began teaching in a one-room schoolhouse in Saskatchewan and, later in 1953, moved to New Westminster where she worked for the Burnaby School Board for 30 years until her retirement in 1984 at the age of 65. Every year since 2005, her grade one students from the class of 1960 have taken Olga out to a fine restaurant for dinner and to reminisce about their childhood.

She raised two daughters as a single parent in a warm, nurturing, and loving home. In 1988, she was blessed with her first grandchild, Matthew, and in 1990, her second grandchild, Alesa. Olga was over the moon. She worshipped them both. In 1989, Olga sold her home in New Westminster and moved to her final home in West Vancouver to live with her daughter Lynda Rabson, son-in-law Richard Rabson, and her two grand babies.

She loved travelling around the world to her track and field events. She competed this past March in Hungary and during her athletic career also competed in England, Germany, Brazil, Italy, USA, Australia, and Finland. In 2009 she was inducted into the Canadian Master Athletes Hall of Fame, received a YWCA Woman of Distinction award and was named Master Athlete of the Year 2010 from Sport B.C. That same year, she proudly carried the torch in the 2010 Vancouver Olympic Torch Relay.

Olga was deeply committed to her Ukrainian Catholic faith. She had been a member of the New Westminster and then the Vancouver Ukrainian Catholic churches. She assisted in fundraisers that helped provide charitable support to various organizations in Ukraine. Every Thursday, with several other ladies at the Holy Eucharist Cathedral in New Westminster she helped make up to 560 dozen pyrogies and 150 dozen cabbage rolls for fundraising dinners.

These delicious dishes sold out quickly. In 2011 she was awarded the Nation Builders Award of the Ukrainian Canadian Congress, Saskatchewan Provincial Council in appreciation for her many years of service in her community.

Olga was a mother, a grandmother, a friend, an athlete, an author, and an avid solver of Sudoku puzzles. She greeted each day with laughter and took great pleasure in the company of her aqua-fit chums at the West Vancouver Aquatic Centre — her home away from home— and enjoyed the camaraderie among the ladies at the Ukrainian Catholic Women’s League of Canada where she contributed to its strong cultural identity.

Because of her age and her outstanding athletic achievements, top scientists in exercise physiology, gerontology, neuropsychology, and evolutionary medicine analyzed her in groundbreaking research trials. Their findings are the subject of a recent book written by Bruce Grierson (the son she never had) titled, What Makes Olga Run? The Mystery of the 90-Something Track Star and What She Can Teach Us About Living Longer, Happier Lives. One of her last extraordinary acts was to write her autobiography, published just last month. She and her wonderful friend Roxanne Davies co-wrote Olga: The O.K. Way to a Healthy, Happy Life.

Olga believed an optimistic attitude and regular exercise contribute to good health, better energy, and a happier disposition. ‘Don’t focus on your age; focus on how you age.’ In recent years, her love of fitness and her remarkable story have made her an inspiration for many.

Olga was predeceased by her eldest daughter Nadine in 1999, her 10 brothers and sisters, and their spouses.

She will be lovingly remembered as a warm, caring person and inspirational leader and greatly missed by Lynda, Richard, Matthew and Alesa, her numerous nieces and nephews and her beloved friends, all of whom touched her life as they were touched by her. Olga’s family would like to thank the emergency response teams and the medical staff at Lions Gate Hospital for the care and compassion extended to them as well as to Olga.

Farewell to our Mom and Grandma, a Super Senior who had a super life.

Condolences may be offered to the family at www.bellburnaby.com

© 2018 Alex Rotas Copyright © All images and content contained on this website remain the property of Alex Rotas. Images may not be reproduced, copied, or used in any way without prior written permission.